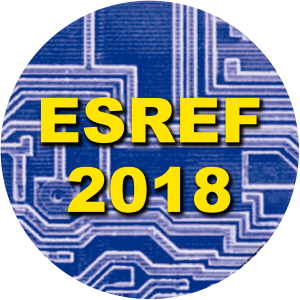 “I really enjoyed ESREF in Aalborg and was very pleased with all the arrangements and the overall logistical organization of the conference at this beautiful location. I should say it was a roaring success with a record number of submissions, exhibitors and a beautifully planned out program with adequate opportunities for technical interactions and social networking. I hope to attend ESREF more consistently in the years to come and look forward to more learning experiences there with different cultural connections to different parts of Europe!”

“I had a great time at ESREF 2018. I learned a lot from the technical talks especially on the GaN reliability. I got chance to network with many other researchers/engineers from academia and industries. The social event at Voergaard Castle was also very well organized, served with a great food and very entertaining shows. Overall, I can say ESREF 2018 was a great success. Congratulations to all the organizers! Looking forward to attend ESREF 2019”

“It was excellent, from the content and from the organisation”

“The catering was perfect”

“Thank you for organizing the conference, I really enjoyed it very much!”

“Indeed, it was a very interesting, and also very well organized, conference”

“Thanks for organising the ESREF conference. It was a good one”

“Thank you for this great conference. I enjoyed it a lot”

“You did a great job”

“The organisation was great”

“The location has enough room for all the visitors”

“My favourite is the app”

“The food was good”

“Great opportunity to meet people from other countries and fields”

“It is very positive”

“Thanks to all the organization”

“I liked the setting”

“I have collected only positive experiences”

“It was my best dinner”

“Really it was a pleasure”

“The bus travel was greatly organised”

“Interesting small stories around the castle”

“The location was wonderful”

“The idea with the historical touch was very entertaining”

“I really enjoyed the drinks, food and the best was maybe the organiser and the artists”

Beautifully situated in Northern Denmark, Aalborg is well connected in several ways. Visitors from abroad will usually either connect through one of the three daily 75-minute flights directly from Amsterdam Schiphol operated by KLM, connected to 260 destinations worldwide.

Besides connecting through Amsterdam, international visitors can fly to Aalborg via Copenhagen Airport which has a virtual air bridge to Aalborg with more than 30 daily connections and a flight time of only 35 minutes; you will have arrived to Aalborg.
Moreover, Norwegian operates a route to/from London three days weekly. And for the Scandinavian visitors, SAS and British Airways connect Oslo, Norway with Aalborg 5-6 days weekly.
For further information about flights to and from Aalborg see Aalborg Airport's website: Aalborg Airport

Arriving by plane you will find yourself at Aalborg Airport, only 10 minutes by bus and taxi from the city centre. Bus no. 12 leaves from the airport several times per hour and takes you to the city centre.
The bus fare is DKK 22 per person, cash only. Neither foreign currency nor credit cards are accepted. However, you can withdraw cash from ATM’s at the airport.

By BUS - going to/from Aalborg or around in the city As you exit the airport building using the revolving doors at the check-in area, you will find the buses going to downtown Aalborg on your right hand side. The buses with the following numbers and final destinations will take you to the bus terminal in Aalborg which is centrally located (with multiple stops along the way):
Metrobuses (number and final destination)

Once the bus crosses the bridge over the Limfjord, you have arrived in downtown Aalborg.

Taxis
You can catch a taxi outside the airport and will take you directly to your hotel. Dial +45 9810 1010 to request a taxi if needed. The price for a taxi ride is DKK 180-300 depending on hotel destination. Most credit cards are accepted.

Trains
In the centre of the city close to conference venue, you will find Aalborg main train station and the bus terminal. From here there are direct routes to many cities across the country. Intercity trains between Copenhagen and Aalborg run on an hourly basis. For more information on the rail network within Denmark visit the national carrier, ''' Travelling by bus'''
The transportation company Nordjyllands Trafikselskab (NT) operates locally in the region and runs an extensive network of local buses in Aalborg. There are also long distance bus routes that link Aalborg with Copenhagen, Odense, Esbjerg and other major cities in Denmark and around Europe.

Please visit Rejseplanen to arrange your travel. The site combines train, regional and city busses to provide you with the fastest and/or most convenient travel plan.

Car
Aalborg has direct highway connections to Copenhagen and Germany. Queues seldom arise and the speed limit is 130 km/hour. Several car rental companies are located in Aalborg and other main cities in Denmark, e.g. AVIS, Europcar and Hertz. For route planning you could check Google Maps, Mappy or ViaMichelin.